Piezoelectric plate sensor (PEPS) a sensor platform completely developed in her lab whose self-sensitivity enhancement scheme permits unprecedented detection sensitivity that elevates genetic detection to a completely new frontier where multiple genetic markers can be detected without the need of DNA/RNA isolation, concentration, and amplification.

There are 3 million Clostridium difficile (CD) infection (CDI) cases is a serious hospital infection, causing 14,000 deaths and costing more than $3B to treat annually. Enzyme immunoassay (EIA) for C. difficile toxins is inexpensive but the sensitivity is only 60%. Automated genetic tests are sensitive but expensive. As a result, current recommendations call for a two-step testing procedure combining toxins EIA and nucleic acid amplification testing (NAAT) such as PCR and loop-mediated isothermal amplification (LAMP) to lower the cost. However, the two-step testing procedure takes time which can delay timely treatment of the disease.

The PEPS blood cancer test is a multiplexed test that detects a cancer-specific marker, Tn antigen and its antibody produced by the immune response in the blood that can be used to detect the presence of cancer in high risk individuals for further cancer imaging testing. Tn antigen is a cancer-specific marker for epithelial tissues. This indicates that Tn antigen can be a cancer-specific marker for a blood molecular test for early detection of cancer in high risk individuals. The challenge is that circulating Tn antigen so far has been undetectable by the current test methods due to the fact that Tn antigen in the circulation is rapidly cleared by the liver. The unprecedented sensitivity exhibited by PEPS makes PEPS ideal to detect the otherwise undetectable Tn antigen and anti-Tn antibody in the patient’s blood.

Detecting BC recurrence in BC survivors

Breast cancer (BC) is the leading cause of cancer for women. Thanks to the improvement in BC screening and treatment of localized BC there are now 3.1 million BC survivors in the US. 1 in 5 of these BC survivors will experience recurrence. BC survivors are followed up regularly for BC recurrence using standard diagnostic, mammography. However, after the surgery and radiation therapy, the remaining breast is highly scarred, making mammography and MRI ineffective in detecting BC recurrence. In addition, there are no recommended serum markers or standard imaging to detect distant recurrences.

Detecting BC in young women with high risk of BC

In the US, over 228,190 people will be diagnosed with lung cancer and over 159,480 people will die of lung cancer in 2014, accounting for 27% of all cancer deaths. The 5-year survival rate for lung cancer is less than 16%. The statistics of lung cancer is very alarming because lung cancer is asymptomatic and there is no screening test for lung cancer. Low-dose CT scan (LDCT scan) can detect early-stage lung cancer. However, 1 in 4 LDCT scans of high-risk individuals (smokers and former smokers with more than 30 pack-years) will be positive while biopsy of every 20 positive LDCT scans yields only 1 positive diagnosis of lung cancer, i.e., the false positive rate is an alarming 95%. It would be desirable to have an inexpensive, minimally-invasive blood molecular test that can be given at point of care as a prescreening test to identify high risk individuals for further cancer imaging testing to reduce the rate of false positives and unnecessary biopsies. 85% of lung cancers are epithelial cancers. The PEPS blood cancer test is inexpensive and minimally invasive while highly sensitive and specific to detect cancer and it can be easily administered at the point of care to prescreen high risk individuals for further cancer imaging testing.

Cancer is a genetic disease driven by genetic changes (mutations) and/or epigenetic changes (hypermethylation). Cancers with different genetic/epigenetic changes respond to therapies differently. For this reason, it is often necessary to assess a cancer’s genetic makeup before embarking on the treatment. In addition, a cancer’s genetic makeup may evolve as a result of the cancer therapy. Therefore, it is also necessary to assess changes in a cancer’s genetic makeup during the course of the treatment. Current cancer genetic testing rely on gene sequencing which requires high-quality solid-tumor samples with more than 50% of cells being cancer cells. The difficulty with gene sequencing is that once the primary tumor is removed by the initial treatment, there is no longer solid tumor sample available.

The alternative is to assess cancer genetic makeup using circulating DNA in the blood or other biological fluids with polymerase chain reaction (PCR). To detect a genetic change, say, mutation against the normal form of the gene (wild type) from the normal cells, PCR rely on the fact that the melting temperature for the binding of the mutant to the probe DNA (pDNA) is different from that for the binding of the wild type to the pDNA. For point mutations, this melting temperature difference is only a few degrees. This, coupled with the fact that mutant is often outnumbered by the wild type by a factor of 1000 in circulating DNA, makes circulating gene mutation difficult. 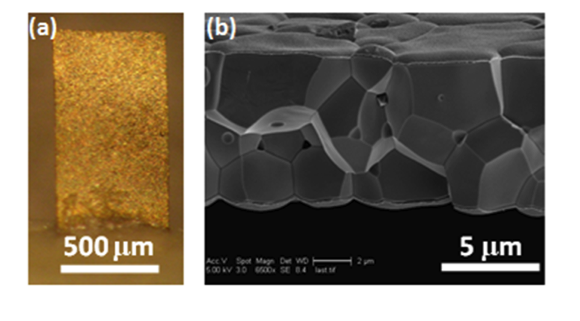 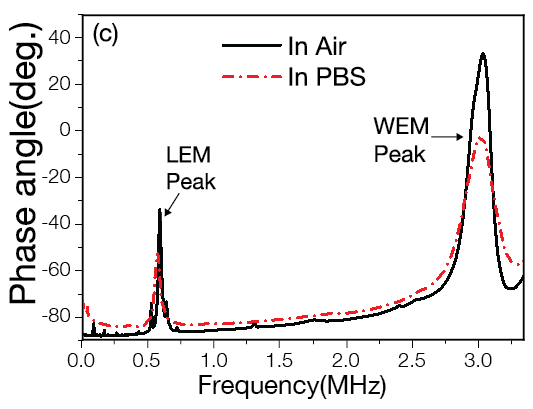 Resonance Spectra of a PEPS 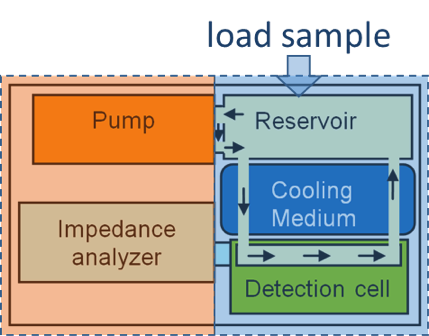 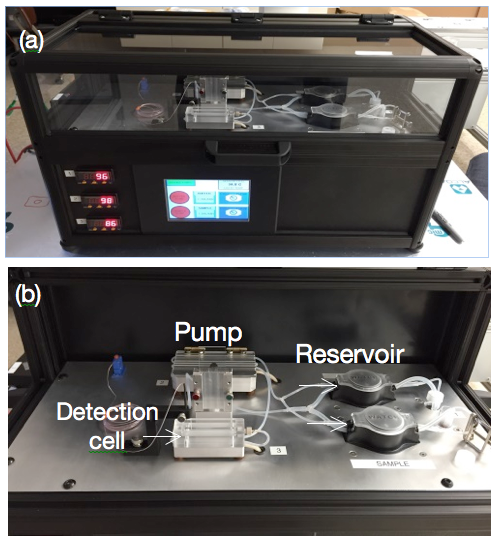 (a) Photograph and (b) blow-up of custom-built lab prototype of the one-step genetic detection system. 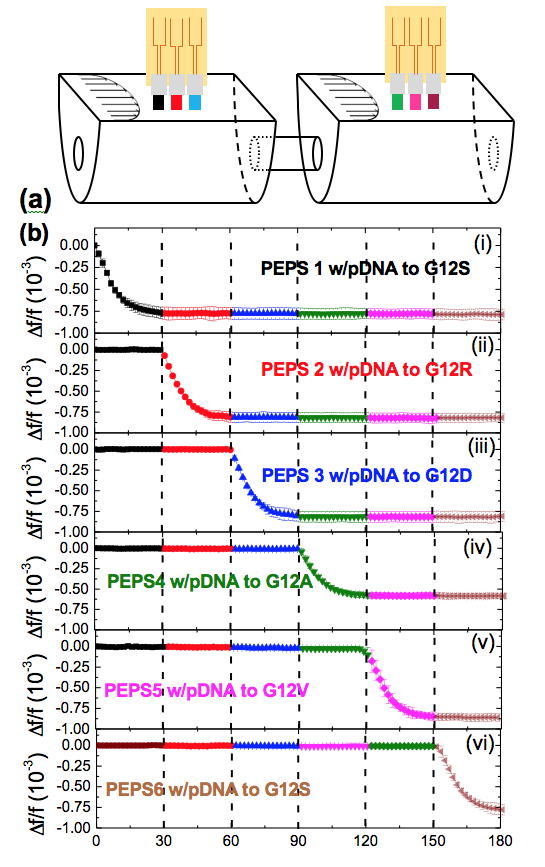